Meadowcreek announced the hiring of a pair of veteran coaches Tuesday to fill vacancies in the baseball and volleyball programs.

The two additions are part of an offseason overhaul of the Meadowcreek head coaches, including the football and both basketball jobs. 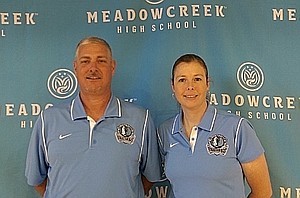 Coach Jessica White comes to Meadowcreek from Northside High School in Warner Robins, Georgia. Coach White has spent 16 years’ in public education. Her last 11 years at Northside have been the most prominent where she taught Health and Physical Education and Girl’s Weight Training. She also served as the Head Volleyball Coach for nine seasons and Head Track coach for four seasons. As the Head Volleyball Coach, she took the volleyball program from a fledgling program to a successful state play-off contender. White was named 2012 County Coach of the Year and facilitated the development of the 2012 County Player of the Year. During her tenure at Northside, White had 15 college scholarship recipients sign to play college volleyball. As the Head Girl’s Track Coach her teams produced two region championships (2014 & 2015), three county championships (2013, 2014, 2015), state runner-up (2015), nine individual state champions along with being named Region Coach of the Year in 2014 and 2015. From 2004-2011 White served as Assistant Girl’s Basketball Coach where she posted an overall record of 159-47, three region championships, four elite eight appearances, and one final four team.

Coach White’s first three years in education were spent at John Milledge Academy where she was the Head Softball Coach, Assistant Girl’s Basketball Coach, and Head Track Coach. In 2001 White was named Region Coach of the Year in Softball as her team posted a 31-3 record on their way to a region championship and state playoff berth.

Coach White’s teaching philosophy is to cultivate young minds by providing a positive, nurturing learning experience where each student can develop to their full potential. She expects success in the classroom as she prioritizes academics fist and believes students are first students and then athletes.

Masters of Science in Teaching and Learning, Nova Southeastern University 2006

Bachelor of Arts in Fitness and Wellness, Brewton-Parker College 1999

Coach Kraig Peebles is humbled and honored to be selected as the new Head Baseball Coach at Meadowcreek High School. Coach Peebles just finished his 24th year in public education. His leadership will begin by supporting teaching and learning in all subject areas and transfer those same theoretical concepts to the baseball diamond. He is coming to Meadowcreek HS from Gainesville High School in Gainesville, Georgia. During his time at Gainesville HS (2008-2015), Coach Peebles coached in two state football championships including the 2012 5A State Championship win over Ware County. Concurrently as a Baseball Coach, Peebles coached in the private sector as an American Legion Baseball Coach, camp instructor, and performed duties as a minor league scout.

While coaching baseball in Florida, Peebles was the Head Baseball Coach at Branford High School from 1998-2004. While at Branford, Peebles built the baseball program as he spearheaded a capital improvement project that entailed building the high school stadium and field from the ground up. On the diamond, Peebles took the baseball program to new heights as they won the first District Championship in school history. He was honored as the 1999 Gainesville Sun Coach of the Year.  Coach Peebles also served as an Assistant Baseball Coach at Columbia High School in Lake City, Florida in 1997 where they made the state playoffs and Assistant Baseball Coach at Oak Hall High School in Gainesville, Florida from 1994-1996; they went furthest in school history with back to back final four appearances capped off with a state runner up.

Peebles is a graduate of P.K. Yonge Laboratory High School in Gainesville, Florida where he lettered in Baseball and Football. After high school, Coach Peebles attended Lake City Community College on a baseball scholarship. After graduating from Lake City Community College, he transferred to the University of Florida where he walked on to play baseball for the Gators and earned his bachelor’s degree in Health and Human Performance.