As the Cross Country team gears up for the region meet next week we talk to Coach Walthall about her team goals and  the standout individuals  from this season.

“Our cross country season has been the most successful in the four years I’ve been coaching Meadowcreek Cross Country.,”  Looking back at our teams statistics, both boys and girls teams have shown amazing improvement.  In cross country, the top five runners score the points in a race.  A perfect score is 15. Unlike other team sports, the lowest score wins the race. One of the many things I love about cross country is that it is and individual and a team sport.”

“Our team goal is to have our top five guys running at 5K in under 19 minutes and top five girls running under 24 minutes,” said Walthall. She continues, “We’re close to meeting that goal.  As we head into our region meet, we have three guys under 18 minutes, one under 19 minutes, and a few hovering around 19 minutes.”

“Our girls’ team has a solid top four running a 5K under 24 minutes.  Our top two, have hit the 22 minute range which helps when we go out to compete in a race.  I think the reason we are experiencing more success this season is because the core team running this year understands the level of commitment needed. They understand goal setting, team work, and being at every practice and race means running faster and performing better as a team and individually. “ 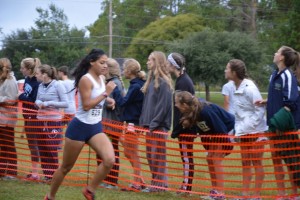 Lizeth Ordonez has been running cross country for two years. She loves being part of the team because it makes her practice her mental toughness, and she feels like cross country is one big family.

Some things running through her mind while running: “Honestly, I sometimes want to stop because I feel weak. But I always think to myself ‘finish what you started’. And then I just imagine all the food I can eat when I’m done.”

Ordonez has had plenty to celebrate this year. Her personal goal is to break the girl’s record that is posted on milesplit.com, website for track and cross country this year.   The original girls’ 5K record was set in the 1990’s. She has placed 1st individually as well as helping her team win 1st place at a JV tournament. Ordonez is 31 seconds away from the record after running 22:40 her first race and 21:54 the following race.

If Ordonez makes up those 31 seconds at the next race somebody needs to get her all the food she imagined during the race.

“I have had the privilege of working with Lizeth since the summer before her freshman year. What I first noticed about Lizeth was that she had natural speed. She ran a few 400s with the varsity girls and got fired up about running with the pack leaders in the workout.  Last year was her first running cross country and she worked hard to run under 24 minutes for her first season.  Lizeth is just another one of our girl runners that sets her own goals and works hard to hit those goals. She isn’t satisfied with just completing the race and breaking a sweat.  Lizeth is not only competitive and hard working; she knows what it means to be part of a team.

“She proved that during track season last year running in some of our sprint relays and sprint events as well as distance events as a freshman. “

“She truly is a shining example of hard work, commitment, and Meadowcreek pride. Lizeth’s commitment to training, her team, and her academics makes her stand out at Meadowcreek as a strong leader.”
I am extremely proud to Lizeth’s coach and I always look forward to the opportunity to see her race. 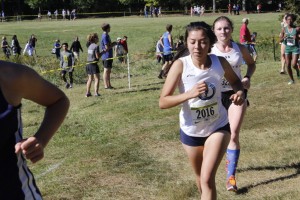 In her second year running Loredo feels this team is a big family. “Being on a team gives you another home,” says Loredo. She continues, “You always have someone cheering you on and wanting you to get better.”

Recently a race in Albany changed Loredo’s perception of herself. “I didn’t think I would even come close to 22 minutes, but I did it, the whole team did it.” It was definitely a proud moment for herself and her team. She still has a goal to improve and get a personal record of 21:30

“Last season was Veronica’s first season running cross country. In the beginning, it was clear to see that Veronica had the desire to compete in every race.  That is not something everyone who comes out for cross country has.  It is something we work to develop in each runner. I give the runners a goal at practice and goal times for races to hit.  Veronica does that for herself. When she doesn’t beat her personal record (PR), she wants feedback.  This season, Veronica has been very consistent and taken minutes off of her best times from last season.  My favorite moment was in Albany watching Veronica run a time of 22 minutes, sitting only 6 seconds behind our number one runner, Lizeth Ordonez. Veronica stayed on her heels the entire race.”

“ Veronica is tough and she runs through any pain or adversity.  It really sets her apart from the rest. She is an excellent student and has become an outstanding distance runner in track as well. If every girl on the team had her tenacity and her desire to compete, we’d really be contenders in this county.”
Meet Samson Maumektew
Junior – 3rd year of cross country
Personal Best: 17:33 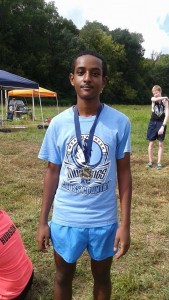 Samson is a leader of the team. He isn’t the type to yell or give a motivational speech. Instead he puts in the hard work and leads by example. “When you practice hard every day at practice, the motivation is that it will show when you compete.”

He is glad that all of his cross country teammates have become friends. He wants to hit 16:59-17:00 on his 5K time. A time which is within reach as he has ran a 5k under 18 minutes this year.

Even with his success over the years in the program as one of the Creek’s top runners, he still gets nervous before a race. But he has a switch. “When we start running, I feel comfortable.”

If you ever watch Samson right, you can see an odd peace over his demeanor. He is in the zone, ignoring the pain, winning races, topping the charts.

“Samson won the Mustang Award last season, the highest accolade for Meadowcreek Cross Country runner, as a sophomore because he is not only fast and dependable in practice and races, and he has the discipline it takes to be a leader and competitor.  He’s a leader in the classroom as well.  Even when he beats his personal best in a race, Samson is not satisfied.  That’s the best kind of athlete to coach.  He is always eager to show me how great he can be and I love the fire he has for the race.”

“To say that I am extremely honored to be Samson’s coach is an understatement. “

“Samson really pulls the rest of the guys on the team to a higher standard. When you see a runner working as hard as Samson does in workouts and races, you can’t help but be inspired by it.”
Meet Vertron Kitts
Junior – 3rd year of cross country
Personal Best: 17:34 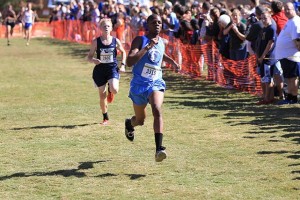 Kitts has been running cross country for two years. He is motivated by the knowledge that other people are getting better while he is just sitting around. He also loves the being part of the team because as he says, “we are not a team, we are a family.” His hard work in practices pays off in races. Whenever he finds a difficult spot in the race, he just thinks about how hard he works in practice. It keeps him motivated to keep moving.

And moving is exactly what Vertron wants to continue to do. Move up the rankings as his personal record is 17:34, only one second slower than Samson Manmektew, and his goal is 17:10. He is proud of his teammates this year and of his accomplishments.

“Vertron has a great deal of speed and ability but I think he understands that having talent isn’t enough to be the best. Last season he did well but had some inconsistent races; it seemed he was not so focused which is easy to lose when you are running a 5K.”

“This year, Vertron has improved in almost every race. He’s gained the maturity to realize that being an athlete is more than just the competition; it’s much more about the preparation.   I love the competition I see between Samson and him.  They are always challenging each other in the workouts and then again when they race.  I love watching both of them because it’s really what cross country is all about, camaraderie and competition.  I’m ready to see both of them run the same pace they run in workouts in a race. “

“We’re lucky to have Verton on the team and I know if he continues to work at it, he’s going to be even better his senior year.” 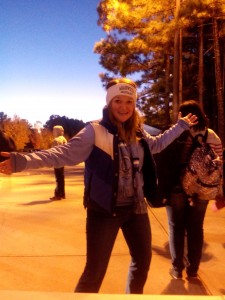 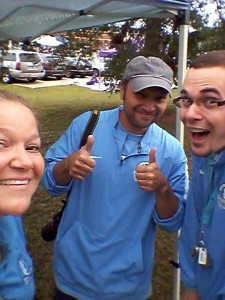