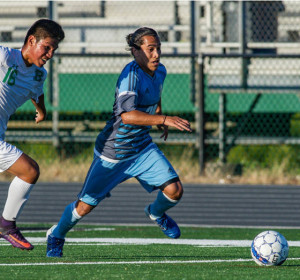 To be exact, Meadowcreek’s 2-0 win Saturday night at McEachern High School was the first state championship for any Mustangs team since the school first opened for the 1986-87 school year.

But even more than bringing the 30-year title drought to an end, the title gave something else the Meadowcreek community, athletic program and its supporters have been craving for nearly as long — respect.

Sure, some of the school’s athletic programs have enjoyed occasional periods of success from a team standpoint — most notably, boys and girls basketball, wrestling and fastpitch softball.

However, Meadowcreek athletes have often endured decades of being looked upon, either with derision or amusement, by students and fans of other schools around Gwinnett County and Georgia as and athletic doormat.

“Us winning this state title, it feels amazing,” said senior goalkeeper Jose Alvarado, who made four saves and was involved in nine other defensive plays in Saturday’s victory. “It’s been amazing shutting people up who have been talking about us bad, calling us (names) and other stuff. It’s amazing making history for our school, especially in my senior year. It’s just unbelievable.”